Forecasting Love and Weather review. This series is quite popular on Netflix and gets a lot of responses from Korean drama fans. Let us help set expectations in this k-drama review. 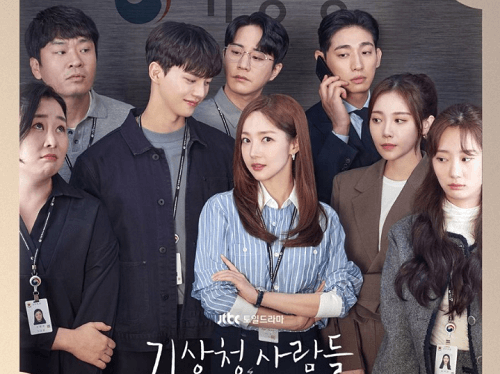 Tells the story of the romantic love story of workers at the National Weather Service office, hotter than tropical nights and more unpredictable than local torrential rains.

Intelligent and well-organized, Jin Ha Kyung works tirelessly to maintain a clear separation between his personal and professional lives. He has few friends at work and has turned into an “outsider by choice” due to his icy personality.

Lee Shi Woo is an independent thinker who never follows the rules. Although he appears awkward, he actually has a great IQ of 150 and is capable of achieving anything if he sets his mind to it. He was intelligent and talented, yet he only cared about the weather.

Han Ki Joon has a silver tongue and is a charming figure. After suffering in the beginning of his career in the service, Han Ki Joon finally used his remarkable persuading skills to be noticed by the spokesperson’s office. But because he had been an honor student throughout his life, he found it difficult to accept failure.

Chae Yoo Jin covers the weather every day. Chae Yoo Jin finally is put on the “weather and lifestyle team,” despite the fact that he dreams of covering high news, thrilling news, and on-site reports when he first starts work. Despite his early dissatisfaction with the task, he eventually came to love his job. 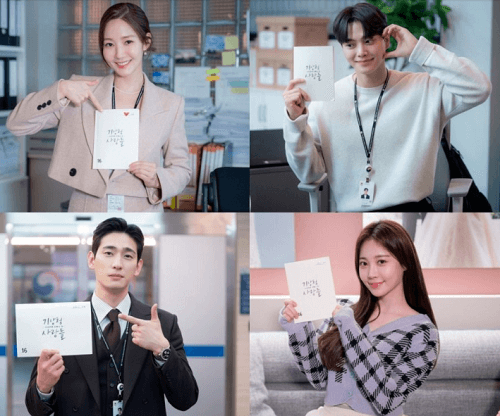 The four main characters and their close relationships with one another are the focus of the story. A bright employee at the Korea Meteorological Administration is Ha-Kyung.

She is about to receive a significant promotion, but there is a snag due to her unscrupulous lover Ki-Joon.

Ha Kyung witnesses Ki-Joon’s affair with his co-worker Yu-Jin. It’s pretty awful, everyone works in the same building and he’s to blame for this problem.

Then matters get complicated, when Yu-Jin cuts ties with the novice worker Si-Woo, leaving without any real explanation. Now Si-Woo is transferred to Ha-Kyung’s team and the two grow closer while working.

This drama is made into a unique workplace romance in the first 5 or 6 episodes. At the beginning, there are some great scenes with Ha-Kyung attacking Ki-Jun, Si-Woo, and Ha-Kyung tease, as well as some promising setups for the supporting cast.

Even if they are memorable, the supporting cast members tend to become a little disjointed as the drama intensifies.

While there’s nothing wrong with such a change of tone, Forecasting Love and Weather leaves a lot to be desired in handling it. There is a real conflict with the scenario as well as it tries to portray bad weather conditions and adds a lot of reality before being suddenly derailed by the incredible character choices.

Does Ha-Kyung really need to travel alone across a storm in the middle of the ocean to deploy a weather balloon? No, maybe not.

The tone is also problematic when the humor part is tackled. There are some shocking moments where jokes are made in the middle of a very serious conversation, and the series is anything but successful.

Ha-Kyung’s hatred for her ex begins to wane and they even end up getting close again later on. I know this is a bit of a spoiler but it’s important to note because a lot of people will probably think this and don’t understand how Ha-Kyung could forgive him.

Some of it could be overlooked if there was actually chemistry between the two main leads, but sadly that’s not the case. With the change in tone, there was a lack of enthusiasm and chemistry from the main cast, as if they just wanted to finish the drama and move on to better projects. And frankly, if you go further than episode 12 or 13, you’ll feel the same way.

The story of the supporting cast is also a bit mixed. Tae-Kyung, Ha-Kyung’s brother, has a sweet and unexpected romance with Seok-Ho, Ha-Kyung’s partner.

Um, the senior and his absence from his family, who never really responded and accepted a happy conclusion, were in the middle, and that was the only positive aspect. Then there’s Si-Woo’s forgetful father belatedly entering the narrative and dispelling what little hope remains of the program.

Is forecasting love and weather worth the watch?

To some extent, the program is fun, comfortable, adorable, and light. This skillfully demonstrates the severe and light-hearted procedural nature of the rom-com.

Is forecasting love and weather have a happy ending?

In the end, Shi-woo and Ha-Kyung face one more challenge before pursuing a happy ending after making peace with their respective previous relationships.

What happens in forecasting love and weather?

This series depicts the cheerful love story of people working in the Korean Meteorological Administration who break, fall, and rise up again, and their everyday life together in the office.

Overall review, Forecasting Love and Weather is your typical romantic K-drama—he’s free-spirited, he’s tense, they find each other and somehow fall in love with each other despite all the craziness around them.

But this romance is written in a workplace drama revolving around the state’s weather service, and there’s been a lot of discussion about how the service decided to collect their forecasts and issue warnings. This show might be for you if you’re a weather geek. If not, well… we’re not sure.