Dare to Love: Hai Ruk Pipaksa is a great Thai drama to watch, especially because of the relationship or chemistry between the main characters. There is a perfect mix of drama and romance in it. People might be hooked on this show while watching it. Check out my review of the event below 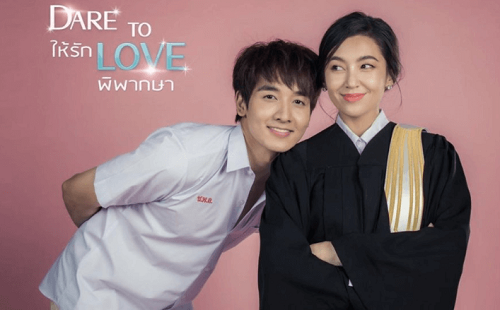 Tells the story of a boy named Napat who has a crush on his senior Thicha. They first met when they were still in school and Napawat immediately fell in love.

Time passed, and now Thicha is a competent lawyer for a law firm. She is a beautiful woman, and that’s why many men try to chase after her.

While completing his degree as a law student, Naparat meets Thicha again. He follows her all day and tries to win her heart.

Napawat wants his attention, even joining the firm as a law student, wanting to prove himself and of course also to get closer to his first love. Will he be able to win this battle of hearts?

For me, this rom-com drama is good. it is well written, the plot of the drama is quite good and will surely make you smile & make you feel all good inside.

All the excellent cast acted superbly and were very fun and realistic in their roles. One of the things I like the most is that the chemistry between Bella Campen & Kongthap Peak is perfect. Looks natural & fun.

Bella’s character is perfect for her & very beautiful in this drama. As for Peak, he just did a great job in his first role and yes, he’s super adorable.

I love how their characters and relationships develop, from strangers to friends, senior juniors, and finally lovers.

Coupled with the existence of his friends who are very crazy, making the scenery more colorful. No wonder this drama continues to get high ratings from both viewers and Lakorn fans.

This drama is not only about love, but also about friendship, and family, and you can be inspired and motivated by the characters who pursue their dreams despite various obstacles.

So overall if you want a show with great variety that will have you both captivated by the male lead and furious at the same time, this is definitely worth watching.

I will definitely recommend you to watch “Dare To Love” and this drama will make you fall in love with the story & characters, especially for Bella as Tricha & Peak as Q. My rating, a score of 7.5/10