Boss and Me is a romantic Thai drama with a typical comedy. It will make you enjoy it, let’s read my review below 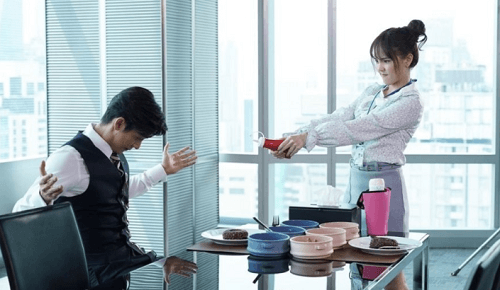 Tells about the life of an innocent girl named Namkhing who has just worked at a large company in Bangkok changed completely because of her rare blood type.

The story begins when Namkhing decides to find a job in Bangkok, a big city far from where he lives and without telling his parents.

He had just applied to a company and was accepted. During the interview, HRD saw Namkhing’s blood type (a rare blood type) and immediately accepted him for work. At first, he worked like an intern with a lot of work and demands.

One night he was called by company officials to go to the hospital immediately because someone needed his blood.

There he performs a blood transfusion on someone and meets Payu, a cold, stern, expressionless boss.

Payu’s cold attitude makes Namkhing afraid and tense with his boss. Despite Payu’s cold demeanor, she actually has a warm heart.

Payu then thanked Namkhing for helping his sister and this is where Payu and Namkhing’s relationship developed slowly.

But now we are talking about this drama not to compare with other versions. Each drama from a different region has its own characteristics, as well as Lakorn.

This drama has many funny scenes, where Aom is very cute and cute while Push is charming and Chemistry is perfect.

But there’s a lot missing when there’s a lot of unnecessary plotting with villains, psychopaths, and men from Namkhing’s past. It would be much better if they focused on the main character’s relationship.

Here they don’t write a good enough background story for viewers to understand and make the characters love.

Maybe the Thai version wants its own twist in the story but so far, the drama hasn’t really impressed me personally. Not so bad maybe you should try it!

While watching this drama on Mango TV, a lot of funny scenes were cut. On GMMTV, I found that there were more scenes than on TV Mango.