P.S. I Hate You is a Thai drama adapted from the novel “Flower Maze” by Baison. Let’s see the details, synopsis, cast, and my review of this drama below 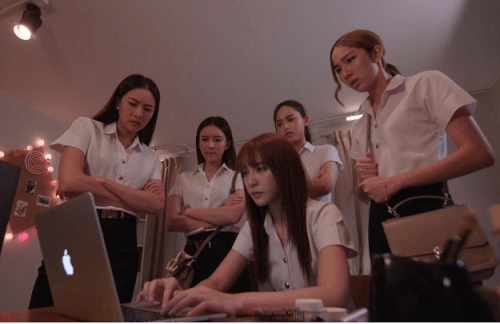 It begins with the secret footage of Phanthiwa being revealed at his wedding to Phureenat. Humiliated by the incident, he decided to commit suicide. Only his group of five people knows the secret of Phantiwa.

Meena, her friend tries to find the culprit. During her investigation, Meena needs to dig into Phanthiwa’s history with her ex-boyfriend, Pitch. The more he digs, the darker the truth about the clique’s relationship gets.

On the other hand, Thidawal has an affair with Chanon, Meena’s boyfriend. Methacha is secretly filmed and blackmailed by Korawee who is Methacha’s mother’s new boyfriend.

Saratsawadee, who seems to be a sweet conservative woman, is Captain Key’s mistress. He was closely watched by Key Natthamol’s wife and Lieutenant Term, Natthamol’s cousin. Palana, a mysterious girl in their circle of friendship, maybe keeping some secrets.

P.S. I Hate You Review

I have to admit, this drama is more of a ripoff story but definitely exceeded my expectations for a thriller/mystery series.

It still carries the same vibes there is murder, betrayal, plot, and definitely a secret. Made in the most mature way and the most dangerous way for the characters to ride.

However, there are many fans who mentioned that they changed some parts of the story from the novel to the serial version (I’m not Thai and haven’t read the novels ️ so I can’t judge the changes), but, it’s still good despite the changes.

Here, the characters are very well constructed, almost all in gray rather than black and white, each tainted with its own faults and regrets.

The acting from the cast as a whole does a great job, which is great to spice up the story further, they still excel here.

It’s a good series overall, there are a few gaps but only a few and doesn’t need to be told too much (like most of the cast’s family identities especially Meen, May, Saras, Pal, Pu, and Term). if you plan on watching this, you should definitely bring your theories and assumptions around every corner.

If you decide to watch this, do yourself a favor and avoid spoilers at all costs until you are done watching. You really don’t want to lose the experience of watching how things unfold with a blank whiteboard.