Happiness is a Korean drama that I recently watched. The title gave me hope for a happy romance, but this is far from Happiness. You’ll be stressed out by this drama, but it’s the perfect exchange for all the action, suspense, excitement, and of course romance. Let’s see my review of this Koran drama below! 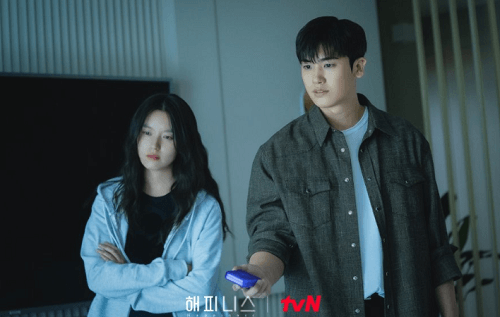 Yoon Sae Bom is a professional special agent with intelligence, quick reflexes, and other special qualities. He had just moved into a new apartment devoted to civil servants.

He also pretends to marry his friend Jung Yi Hyun, a detective who investigates the spread of a mysterious disease in the apartment.

In short, there is a pandemic caused by failed drugs for pneumonia being reused as narcotics to increase focus. But patients taking the drug are not aware of the severe side effects after repeated use.

The side effects are severe enough that the patient experiences an unquenchable thirst that only human blood can satisfy.

They wander around the apartment where Sae Bom lives and start infecting some of the residents there. Eventually, the local government ordered the complex to be closed from the rest of the city. And there are still Yoon Sae Bom, Jung Yi Hyun, and several others trapped in the apartment building. They survive on little food until outside help arrives.

For this drama, the most appropriate definition that comes to mind is “Happiness is not the absence of problems, but the ability to deal with them.”

The basic concept of Happiness is a problem and we’re having a lot more of it these days, right? But what makes this drama stand out is the different approach to showing human behavior during a crisis, more so than in apocalyptic situations. Yes, that’s how you have to understand and pay attention to everything keeping it in mind.

This drama is entirely about the survival of society as residents of different classes who are trapped inside the building, have to patiently wait until the restrictions are lifted.

Meanwhile, they must avoid contracting the virus at all costs and resolve conflicts such as fighting over food, water, and most importantly saving themselves from each other.

I am amazed by the plot development in this drama, it is very good, but of course, it is something to look forward to and most importantly in a thriller drama.

For some drama, it’s really constantly gripping or something that makes you sit on the edge, but here it doesn’t. There are examples of kindness, humanity, love, and care, all of these combined in an appropriate space. This is great for relaxing the audience a bit.

The acting and chemistry between the good Happiness’ lead between Hyung Sik and Hyo Joo are often victims of clichés and quieter settings that don’t always weigh against the heavier-hit moments of the series.

I think they did a great job with acting and convinced me that they are both tough characters who can beat zombies and villains.

I also like the drama’s supporting characters also have an interesting part in the drama’s events from Han Tae Seok (Jo Woo Jin); fired military informant agent to apartment dwellers.

Also, I like that Lee Joon Hyuk who plays Detective Kim Jung Gook (Yi Hyun’s supervisor), and Park Joo Hee as Lieutenant Lee Ji Soo (Tae Suk’s assistant), are my favorites. The acting department does pretty well here but I don’t think it has characters with significant scope to show their skills.

The ending is indeed filled with some loose ends but gives a sense of completion to the series. But it doesn’t really mean much to me because ‘Happiness’ offers an interesting storyline with contemplation with a good cast and intrigue for viewers, and gives room for philosophical thinking towards the true definition of happiness in life. 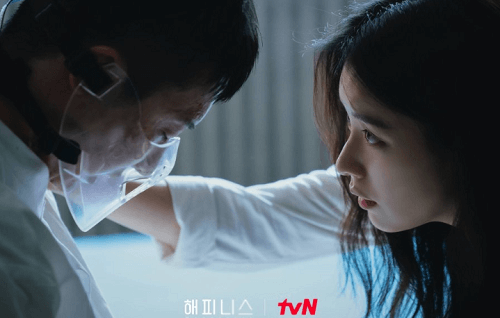 Is Korean drama Happiness worth watching?

Worth a try, this drama has strong characters, an interesting plot, and a sticky ending. The series is good, one of the best from KDrama.

Is Happiness K drama a romance?

There is a romance between Hyung-Sik and Hyo-Joo shown. This is one of the main points of the show behind the chaos and trouble.

Is the Korean drama Happiness worth watching on Reddit?

The average Reddit viewer rating for this drama is 9.0/10 and it’s worth watching. Would definitely recommend especially if you are one of those who stay away from this genre.

Overall, “Happiness” offers viewers an interesting concept with a bit of depth and romance in between the backdrop of a zombie thriller.

Not everything is scary, this drama is able to add a touch of suspense and sweetness in an interesting and fast-paced storyline.

This whole piece is thrilling and blows you away with its suspense at some point, but it might not feel too exciting, which is okay because it’s more important for you to understand the timeless message this show is trying to convey.

It is totally worth watching once and I would definitely recommend you give it a try.