I watched this drama because of its unique plot, about one body with twin souls, something I’ve never seen before. For that, let’s look at my review of the Chinese drama Two Souls in One below! 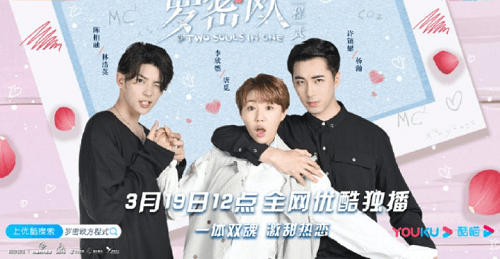 The storyline follows brother and sister twin brothers, Luo Ou and Tang Mi. One surnamed their father and the other surnamed their mother. Their parents died early, and they have been living together.

Luo Ou is now a rising star who was scouted for his talent in acting. Meanwhile, his younger sister Tang Mi continues to live an ordinary life.

One day, Luo Ou’s hopes are shattered when he suddenly gets into a car accident and falls into a coma. After the accident, Luo Ou suddenly awakens inside Tang Mi’s body, where she realizes that they now share a body.

In order to investigate the cause of her accident, Luo Ou convinces Tang Mi to dress like a man and take over her role in the upcoming drama.

Tang Mi then starts mingling with the crew and meets up with her high school senior Yang Han again. At this time, Yang Han was already well-known and did not remember the female student. But Yang Han paid great attention to this motivated young man.

He also soon discovers Tang Mi’s “secret”, and the two fall into a series of misunderstandings that lead them to fall in love with each other.

Two Souls in One Review

This is a drama that has a unique plot, usually the male and female leads will switch bodies and so on but this time it’s his own sibling. And there’s character development that I really like.

The female lead is one of the most beautiful androgynous actresses I have ever seen. He can really look like a boy or a girl. She is the typical sweet, innocent, caring, and submissive woman who listens to Yang Han and always thinks of him as a good girl.

This series also has elements of comedy and romance which are quite enjoyable to watch. It also really shows how much a person sacrifices for their loved ones.

The Cast of Two Souls in One Chinese Drama

Huang Ri Ying as Xia You You

Overall, I like the main character’s actions and I find it quite enjoyable. But the parts it lacks in the second half of the show are a bit sluggish. The ending opens up to the brothers, lacking in a number of ways, but that’s okay it’s worth watching. My rating for this drama gets a score of 7.2/10.