The Taoism Grandmaster or also known as Love of Three Realms on Youtube is a 2018 Chinese wuxia drama.

Again I found a drama with a different title on youtube. You can find this drama easily on Youtube, of course, complete with English subtitles.

Well, based on what I’ve watched so far, I’ll give my first impression of The Taoism Grandmaster’s Chinese drama review below. 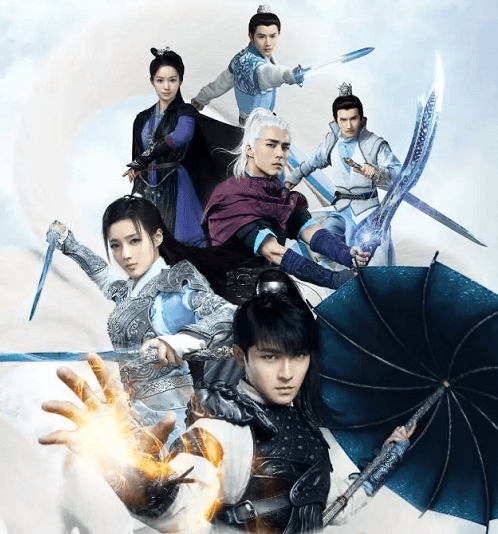 The story begins with a battle between the Phantom Clan and the Three Realms (Human World, Heaven). The Wolf King is the leader of the Phantom Clan who seeks world domination for his clan. The opposite side, aka the good side, is led by Yang Jian who is the general of Heaven.

Yang Jian manages to defeat the Wolf King using the holy armor but feels sorry for the rest of the Phantom Clan when their leader dies. He then followed the Wolf Queen’s request, to seal the Wolf Clan with a prophecy that a Pathfinder would be born a thousand years later and would determine their fate. This is the background story of this drama.

Time flies and now it’s almost 1,000 years, this is where the story begins.

Zhang Ling is a child who was abandoned by his father to be raised by a neighbor’s aunt and grows into an optimistic young man who is always positive and carefree. Although her personality can be a little overly optimistic, she is a very intelligent person who always seems to be able to overcome whatever obstacles she faces.

As his father said long ago, Zhang Ling left his village one day to pursue his “way” (if you understand Taoism, you will understand the term “way”), which is his way of life. In doing so, he first encounters Donghuang Feifei and some of his friends while trying to hunt a demon that haunts a village.

After resolving the conflict, the Five Fairy Alliance (the main sect in the drama) starts recruiting young martial artists to fight the Phantom Clan as the thousand years are running out and they need to find out who the Pathfinders are before the Phantom Clan rises.

Of the Five Fairy Alliance, there were five masters, each with a different sub-sect and power. However, the leader of the five was Dong Huang Tai Yi, the eldest and most powerful. During recruitment, each disciple must undergo rigorous and dangerous trials to test their skills and abilities.

This is a good drama to watch in your spare time. I watched it for a total of five days. But if you have more free time, watching it will be like 2-3 days because the first few episodes will make you addicted to watching all 46 episodes. I’m not a fan of long-episode dramas but this drama is not bad.

The storyline here is amazing. I think they really put a lot of effort into making it. I feel like there’s no filler here (maybe a little flashback here and there). The story doesn’t just make one character shine but all of them. There’s always more to each episode, so if you’re thinking of skipping a few episodes, you might regret it.

The acting of actors here plays their roles very well. Even side characters, supporting characters, and antagonists to the main character. One of the reasons I watched it was because of the handsome actors and beautiful actresses. Also, the couple’s love here is not only for the main partner but also for the supporting partner.

The ending, I think most people will see it as a happy ending. But some will see it as a sad ending if you like romance because the male lead doesn’t end with anyone here. You know the typical Chinese colossal drama, sometimes involving romance but sad in the end. I’m not a fan of sad endings, but I think an ending like that is needed to make it more interesting.

Wang You Shuo as Yun Qi

Overall, it’s a must-see drama that’s worth spending your time on 46 episodes. I really enjoyed this drama and recommend it to you. It focuses on friendship in all its forms, and while the story is often lighthearted, it doesn’t shy away from showing the result of distrust or putting the other person too far above yourself.